As Daddy used to say, I'm not worth the bullet it'd take to shoot me.

I've been home almost flat on my back for going on two weeks.  Tomorrow I have the distinct pleasure of getting steroid injections in my neck.  Aren't you jealous?

The good thing about being immobile is that I've conjured up scores of quilt designs in my head.  Or maybe that was the pain medicine.

I'm typing this with one hand.  So I have to make it short.

Please think good thoughts for me tomorrow as you're having your morning coffee or tea.
Posted by Vicky at 9:06 AM 34 comments:

Lots of hyphens up there!

There are two $25 gift certificates from the Fat Quarter Shop that are burning a hole in my pocket!  (I need to look up the origin of that expression!)

Sorry this has taken so long, but LA Quilter has gotten O-L-D, and the various aches and pains make her feel about double her age.

The two winners were chosen at random.  They are:

Toni Ann, TPott, who is not a blogger but has been a faithful commenter for very long time.

Carly, Citric Sugar, who is such an inspiration because she's organizing her stash!  Yeah!  I need that inspiration!

If you two ladies will email me with your email address, I'll get your gift certs off to you.  It may be tomorrow because I have a couple of things to do today.

First, there's the MRI at noon today.  I was able to see the neurosurgeon yesterday.  From my symptoms and a less than stellar CT scan from the hospital, he is fairly certain I have one, possibly two ruptured discs in my neck.  No trauma involved.  I have degenerative discs; in other words, I've gotten O-L-D.

While Penny is not 100%, she's feeling much much better.  Thank you to everyone who sent words of comfort to me about her condition.  Penny has my heart -- is my heart!  I love that little punk so much.

I'm wanting to sew this weekend, but I don't think that will be possible.  That Brrrrr Park stuff is covering my sewing and cutting tables.  Speaking of sewing table, I need to call Upland Sew & Vac to check status on my two new machines.  Wouldn't that be a bummer for them to come in while I'm not able to play with them?

I'll be back over the weekend to update the condition of the patients.  In the meantime, take a few stitches for me, will you?
Posted by Vicky at 8:13 AM 10 comments:

She went back to the vet this morning, and is doing a lot better now.  The swelling is down about halfway, and she can put weight on that leg.

Her Mommy is not doing so well, though.  After I dropped her off this morning, I headed to ER.  I had chest pain and pain radiating down my arm.  I was scared.

It turned out, fortunately, that my heart is good and strong.  Apparently I have one or more bad discs in my neck that are pressing against a nerve.  After spending practically all day at ER, Penny and I are now both home and getting ready to take a nap.  Whatever they gave me made me sick as ..... well, sick as a dog.

We're fine.  We're just doing our level best to make sure the medical/veterinary economy is prospering.

Poor Penny.  Friday evening when I got home, I noticed she was limping on a back leg.  I figured she had maybe sprained it jumping off  the sofa.  I watched her a while and she didn't seem to be in any pain.  So I made plans for our weekend and packed her little suitcase.

The next morning, wow, she was hurting.  I rushed her over to the vet.  She was running a fever and was really limping badly.  He wanted to keep her, do x-rays, start an IV.  I was torn about going out of town overnight, but I figured she'd be in good hands with the vet.

I talked to him later on Saturday.  He said her hip, knee and foot   x-rays were fine, but he did see a "suspicious area" on her spine.  He said she was responding well to the antibiotics and steroids, and I could pick her up today.

I saw the x-rays after work today, and while there was a narrowing at one disc space, everything else looked fine.  He gave me three meds to give her starting tomorrow.  We drove home.

When I got home, I put her down in the kitchen and she couldn't stand.  She was holding up her right front leg.  I looked more closely and it was swollen to twice the size as the other front leg.  I called the vet right away.  That's the leg they had the IV in, and he said some fluid had probably leaked out of the IV.  He told me to use warm compresses.  He thinks she'll be fine, but if not, I'm to go back over with her in the morning.

I blocked off the sofa so she can't try to jump up there and put her bed on the floor.  She's laying there licking the front leg.  She did relax a bit after the warm compress. 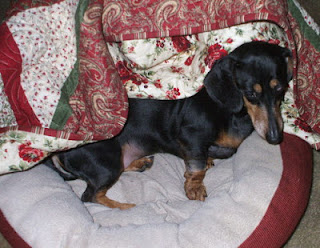 I don't know if it's visible in the picture how swollen her leg is.  You can see where the tape was wrapped around it.

My baby is four years old today.  What an awful birthday she's had.  I'll make it up to her big time tomorrow and for the whole week.

Sorry for going on and on about her, but I'm worried sick.  I know she'll be okay, but it just breaks my heart when something is wrong and she can't talk to me about it.  And I'm so disappointed that she couldn't go with me to the field trial and see all of the really big laborador retrievers.  She would have had so much fun.  We had made plans to take her picture up on the table with the trophy.  That would have been a cute picture.

The winner of the $100 gift certificate to the Fat Quarter Shop is an anonymous commenter.

Happy Birthday to Penny! Love celebrating your Highness!
As far as what you're loving, I picked one out for you, "Judie's 25th Anniversary."
As for me, I'm still swooning over Secret Garden -- so hard to recover after working with it!
Congrats on your blogging adventure anniversary too.
xoxox
Sally

I think I know who this is because I think we've talked about our mutual love of Robyn Pandolph's Secret Garden line before.  But just to make double sure I have it right, Sally, please send me an email to confirm your email address and I'll get your gift certificate right off to you.  Congrats, and have fun shopping for your 25th Anniversary collection by Judie Rothermel!

Oh, and that present was from Penny for her birthday!

A whole bunch of you guessed right over the collection that's got me all ga-ga now.  Yes, it's the new Minick & Simpson collection, Indigo Crossing.  Gorgeous stuff!

Later this week, I'm going to choose two more names from those who left comments for this give-away.  Each of those folks will get a $25 gift certificate from me to celebrate the seventh year anniversary of LA Quilter.  I was going to do it tonight, but I need to go tend to my baby.

Thank you to everyone who left comments.  Anniversaries, birthdays and give-aways are fun, aren't they?  Well, for everyone except poor Penny..............
Posted by Vicky at 6:01 PM 22 comments: 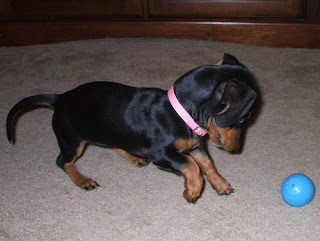 She was the funniest little puppy.  She healed my heart.

February 11th is also the seventh anniversary of LA Quilter!  Yikes, seven years!  Where did the time go?

I guess it's true that time flies when you're having fun!!

To celebrate, there's a give-away, of course!!

Leave a comment if you'd like to win a $100 gift certificate to the Fat Quarter Shop!  In that comment tell me what fabric line is floating MY boat right about now!  But also tell me which one is floating YOUR boat!  Or flying your kite!  Or .............. well, you get the picture!

The drawing will be on Monday, February 11th, when I get home from work.

Remember, there must be a way for me to contact you if your name is drawn.

Penny and I are going on an adventure this weekend.  Hopefully she'll cooperate when the camera comes out!  But if she doesn't, what else is new?

P.S.:  There *might* be a couple of other smaller gifts.  I always reserve the right to choose an extra just in case something you say really strikes a chord with me - or Penny!
Posted by Vicky at 5:59 AM 72 comments:

You know what's worse than having to go to work on Monday?

Having to call in sick because you have the stomach flu!

I think it's about run its course.  I know this because the few sips of water I drank thirty minutes ago have stayed down.  Uh oh, did I just jinx it?

And Saturday means sewing starts for the weekend ... after a haircut, a car wash, and a market run!

I plan on finishing up the Brrrrr Park/Winter blocks and start setting them, but I need to do a quickie first.  Well, I think it's going to be a quickie, but you know how that goes!  Whenever that's done, it's back to my quilt.  Finish what I start, you know!

Like Thelma, I've been thinking about the next quilt I want to make.  I'm going to knock a couple of things off my Short List first, but I think this one will be next up on the cutting table. 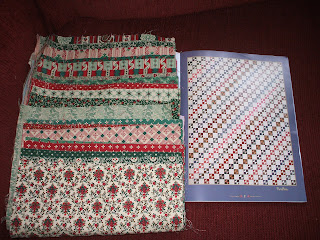 It's from the book Summer Gatherings by Lisa Bongean and Carole Charles of Primitive Gatherings. The fabric is an old Judy Rothermel line.  I blogged about wanting to make this in August of 2011.  Think it's marinated enough by now?  :)

Kathie would have this knocked out in no time flat, but it'll take me a while to make.

A few months ago someone I was chatting with via email asked me why I didn't sew more or faster, etc.  That person had forgotten I work during the week.  It's just the way it is in my little world for now.  My goal is to retire, and that means working until then.   But, gosh, won't it be fun to get up in the morning with nothing planned for the day except whatever I want to do!  I can't even imagine that lifestyle, but I'm so looking forward to it!

Darlene almost inspired me to start making Schnibbles -- almost.  I think I'm going to stick to my plan for this year, i.e., some larger quilts for my beds, Christmas quilts, and attacking the Short List.  Maybe 2014 will be my Year of Schnibbles!  Remind me of that next year, Darlene!

I have an event to go to next weekend out of town, so no sewing then.  Penny will be able to accompany me.  That will be fun.  I think.  Anyway, this weekend is crunch time!