Yep, today's the day I get back in the cottage and turn on the 750.  I've been putting it off and really don't know why except that I wanted everything finished back there first.  It's going to be a while before that happens, so I might as well just do it.  Of course, I'm already procrastinating this morning, doing laundry in my pajamas instead of showering and making the trek.  Okay, okay, I'm going just as soon as I finish this post.

I have so many UFOs that are near finished, but I need to concentrate on a couple of things before Christmas.  I promised a friend I would make two Route 66 placemats for her sister's motor home.  I have the fabrics but just need to sit down and do the boring cross hatch quilting on those.  I have three quilts that need bindings, so those need to get sewn on.  And I have two quilts for Brenda Riddle's Quilted Comfort project that were lost in the move.  I've found the tops but only one of the backings.  I need to make those a priority.  Once these items are off my plate, I can turn my attention to other things.

I'm having the worst time finding my pictures on Picasa.  It makes no sense because I've been using that program for years.  I downloaded several pictures and this is the only one I could find, so this is it for today. 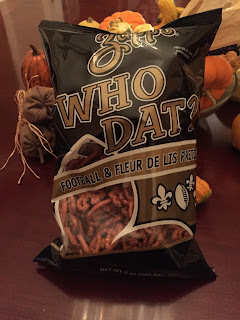 Zapp's is a Louisiana company founded in 1985.  They started out with kettle cooked potato chips with a bit of Cajun seasoning, and their menu has expanded to include these pretzels in the shapes of footballs and fleur de lis.  For everyone who doesn't know, the fleur de lis is the logo of the New Orleans Saints, and "Who Dat?" is the official saying, I guess.  LOL.  Louisianians certainly take their football seriously.  (But we won't talk about LSU's loss to Bama last week, will we?)

I need to figure out computer things.  I need a new blog site and somewhere else to download and edit pictures.  I just don't have the knowledge or the desire to deal with those things right now.

I've finished 208 out of 291 of the baskets.  My goal is a minimum of one a day, and that's all I've gotten accomplished for the last eight days.  I'm back at physical therapy when I thought I was done.  Turns out my "good" knee is now my "bad" knee.  I have developed chondromalacia in that knee, probably from overcompensating the past year.  It'll get well but I have to back off on exercising for now and can only do certain things with that knee.  It has certainly messed up my nice little exercise routine.  I was dropping a pound a week exercising, a slow and steady progress, and was feeling good.  I'll try to keep that up but it will be harder now.  I read something someone posted a couple of weeks ago, "My goal is to lose 10 pounds.  Only 15 more to go."  That cracked me up.

It has been so wet here for the past month.  This week has been sunny but the yard is saturated and the mosquitoes are horrendous.  I had totally forgotten about those as we didn't have any where I lived in SoCal.  I took Penny out yesterday afternoon when I got back from therapy, and she was coated by mosquitoes in about two minutes.  She was trying to pee and I was swatting at her back.  The look she gave me ..... "Really, Mom?"  I finally had to just leave her alone for a couple of minutes to take care of business.  She's on heartworm preventative medicine, but it still disturbs me to see them on her.

All of this rambling - yes, procrastination.   So off to the cottage.  Wish me luck!
Posted by Vicky at 8:15 AM 8 comments: