It's been a slow healing process and slow unpacking, but now I'm totally motivated!

Yesterday I ordered the Horn cutting table.  The movers took apart the wire rack cabinets/shelves which I used to cut on.  They are in a million pieces.  I don't know what possessed them to do that.  I bought them in one piece, and they could have easily loaded them without disassembling.  So I have been struggling on the cutting.  It will take a few weeks to arrive, so I'm motivated to get the Cottage cleared out of boxes, at least the downstairs for now. 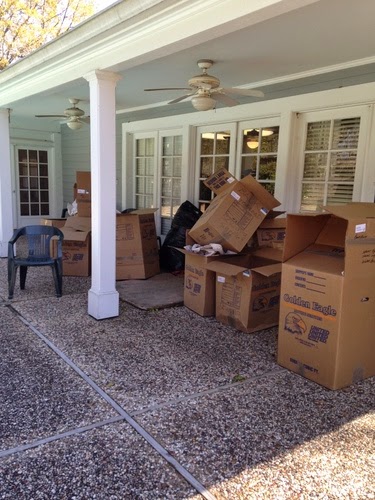 I actually added four or five more empty boxes to this pile after I took the picture.  My goal was five.  I think I surpassed that nicely.  There are boxes in boxes here, so while I didn't count the empties, there were a lot! 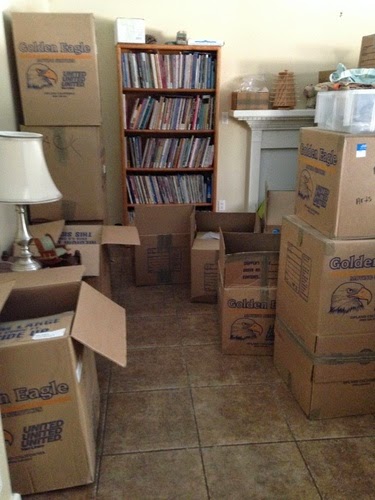 Everything in this picture is emptied save for one box of Pandolph fabric that must be tubbed and put upstairs. 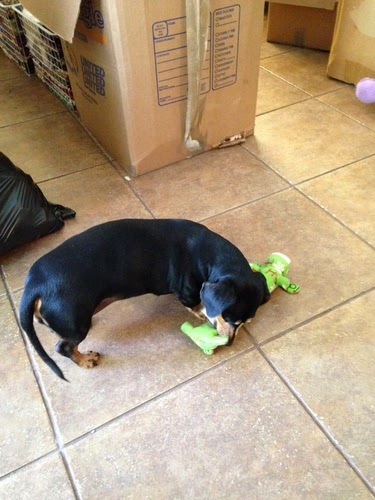 I even found the box that had Penny's toys in it.  She was one happy camper when I tossed the little green weenie dog on the floor! 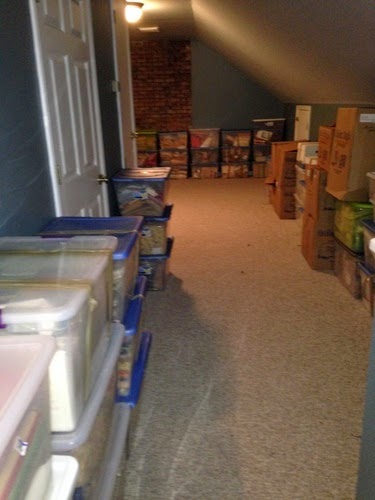 It's shaping up downstairs.  I said I wasn't going to do this, but to keep it real, this is the upstairs. A lot of work needs to happen here, but my goal is to get the downstairs unpacked and organized so I can sew.  And cut on my new cutting table.  And enjoy my retirement.  I'll work on the upstairs between other projects going on around here.

The great news is that I found the totes that had the projects I had put aside to work on here.  They are:  Moda Building Blocks, the It's Sew Wonderful curved blocks, James River Blues blocks, and a kit that Mary Ann and I talked about just last night.  I also found a Bunny Hill embroidery project that I searched for a month or so ago.  It just needs the scalloped border that I've been procrastinating on for over three years.  How they packed things make absolutely no sense to me.  There were boxes of totes, family picture albums, dog toys, magazines, etc., all mixed together.  That's why it's been so hard to find things.

Slow healing -- I had an MRI a week or so ago, and found out this week that I have two fractured bones in my knee and a complete tear of the ACL ligament .  That explains the swelling and instability of my knee.  It really doesn't hurt very much except when I step wrong and twist it.  I'm negotiating stairs just fine albeit a bit slowly.  So I start rigorous PT next week and will be fitted for a special brace that I'll be wearing for quite a while.  I wondered aloud to the doctor why the fractures had been missed on two sets of x-rays.  It's because they are non-displaced.  Whatever.  I just want to get well now.  Patience is not a virtue I possess.

Three hours out in the Cottage and I'm so tired.  Need to get ice on my knee and take it easy for the rest of the day.  Yeah, I can do that!!
Posted by Vicky at 11:45 AM 9 comments:

I've not been hibernating.  Promise!  It's been so busy around the old homestead but quilting hasn't happened.  Today is the day.  I'm attacking the 2014 Designer Mystery blocks and I won't stop until they're done.  Or caught up.  Or until someone rings the doorbell.

There has not been one day since I've moved here that I've had the whole day to myself.  Not one.  I guess that happens when you buy a really old house, immediately have a bad roof leak after a storm (Day 2 here) blows a turbine off the roof, and you start calling in contractors and estimators for various projects.   And then there are plumbers, yard folks, the cleaning lady, window replacement company - it's a never-ending stream.

It must be the moon rocks.  Right, Carrie?

Here's where I am at the moment. 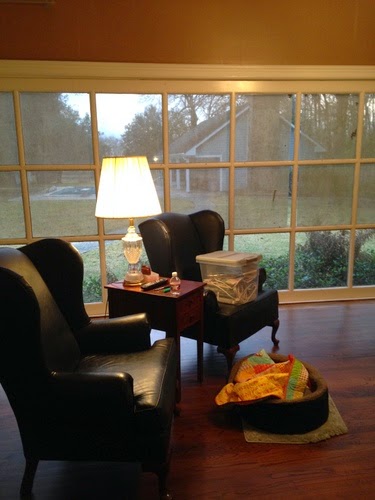 My den has a 20 foot window. I love that I can see the whole back yard, the Cottage, and the bayou.  But ... there's always a "but" ... it was leaking horribly in that same Day 2 storm.  The old towels I was going to throw away ended up wadded up all along the bottom of the window to protect the floors.  All 20 feet of it.  After fixing the roof, the contractor looked at the window.  He had ideas of how to fix it, seal it, do whatever to make it stop leaking.  Then we discussed replacing it with double-pane glass.  As it stands now, it's cold by that window.  And when I was here this summer it was really hot.  Not just the sun on the glass, but it seemed to be seeping in.  Just like the cold air has done recently.  So it's going to be replaced, but it will look different.  There will be two windows on either end that open, and then the 12 feet left in the middle will be what they call clear-view.  I'm not being true to the vintage of the house but I have to do what makes me comfortable living here.  Probably two more weeks until that is installed.

I've held off ordering the furniture for that room.  It's best to wait until the construction is done - or the moon rocks are put back.

My friend, Sally, told me that Orange Glo would work wonders on the old wood floors.  She was right. 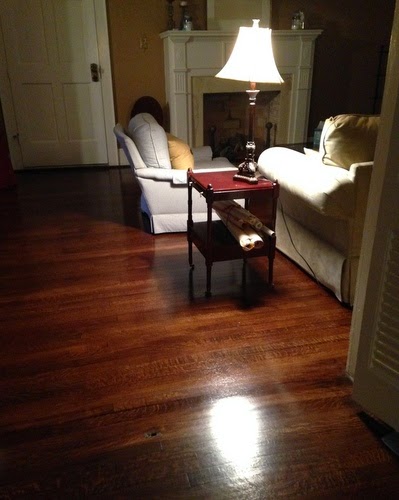 I was going to have them sanded and refinished, but I kind of like the older look of them.  The product did exactly what I was told it would do.  It brought out all the grain in the wood and gave it a gentle shine that's supposed to protect the wood.  Okay, the shine looks really bright here in the lamp reflection but it really isn't that glossy.  This picture is from the dining room looking into the side of the living room.  The door goes out to the carport.  The furniture is old.  I've picked out new furniture for the room but that will wait until the construction is done.  The floors in the picture of the window have not been deep cleaned yet.  They're really dull.  I'm not doing that room until these men quit tromping through with their boots on. 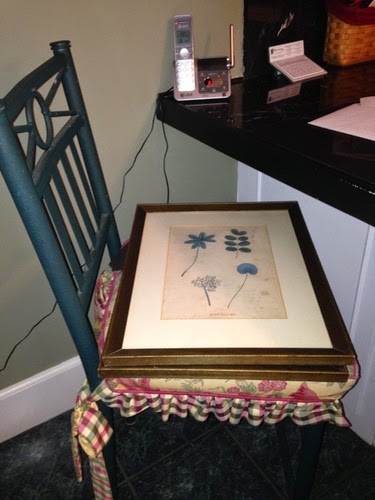 I'm also thinking about where to hang pictures.  These two Redoute prints are going in the kitchen.  I love botanical prints, and Pierre-Joseph Redoute is one of my favorites.  Picked these up at a private school auction probably 25 years ago for $30.  According to an old hand-written note on the back, Redoute was "French - Royal gardener.  Superb botanist, artist and designer.  Most famous for his pictures of roses and lilies.  Art teacher to Marie Antoinette.  He survived the French Revolution and was engaged by Napoleon to teach the Empress Josephine and the two succeeding queens."  The prints have some old stains on them but I don't care one bit.  I think it gives them character. 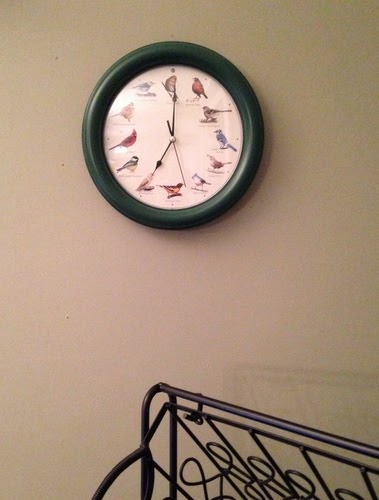 I've said many times that I love messing with Penny's head.  For instance, I have/had an old squeaker that she pulled out of a toy.  I kept it on my sewing table, and when she would start snoring really loudly I'd give it a squeeze or two.  It was hilarious watching her trying to get into her hunt mode while still half asleep.  Okay, I'm a bad mommy.  So my nephew gave me this bird clock for Christmas.  On the hour it chirps or hoots or sings the sounds of the bird it's pointing to.  For a month and a half she jumps up and runs around trying to find the bird.  This morning she finally figured out the sound was coming from up on the wall.  She looked like a pointer.  Ears up, body stiff, tail up and quivering.  I guess it's a good thing it's on the wall where she can't reach it! 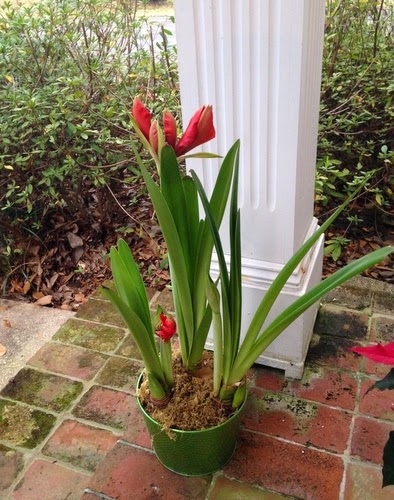 My late boss' wife gave me a pot of amaryllis bulbs for Christmas.  I've been carefully putting it out every day and taking it in at night when the temps drop.  This week I saw color on it.  I'm so excited because I love-love-love bulbs.  I inherited that from my mother.  There are plans in my head to plant a ton of bulbs in the flower beds out back.  It takes some bulbs two years to bloom but that's okay. I'm in my forever home.

Yes, the front porch needs to be scrubbed, but I'll wait until winter is over to wash away the character that has grown on the bricks during the rainy season. 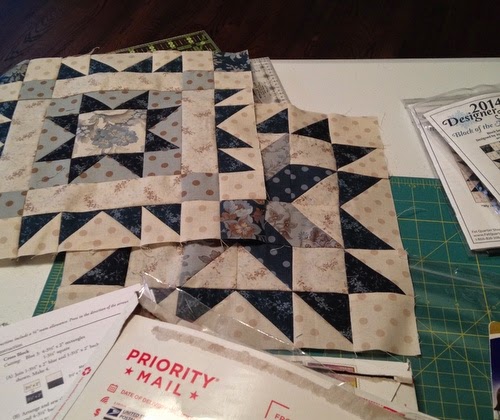 I'm off to sew.  I'll be at the temporary table set up in the den facing the TV if anyone needs me.  By this time next week I hope to be in the Cottage sewing.  I'm sure there will still be boxes around, but at least my sewing table and Bernina will be set up in their forever home.
Posted by Vicky at 6:52 AM 13 comments: