I had quite a bit of excitement here Friday afternoon.

I had just come downstairs from taking a nap when the front doorbell rang and then several hard knocks on it.  I looked out and didn't recognize the car.  Stupidly I opened the door a crack to see a younger man standing on the steps with no shirt on.  He asked if they could camp behind my house.  No, it's private property.  Then he wanted to know if they could camp behind the house next door.  That's not my property.  I can't give permission to do that.  A guy driving the car in the driveway, also shirtless, leaned over and yelled out if the house next door was for rent.  No.  He then said they were going to see if anyone else would let them camp behind their house.

I watched as they pulled out of my driveway, and noted it was a dark gray sedan with no license tags.  They turned towards town.  I thought about it a minute and decided to call the police department in my little town.  The dispatcher took the info and said she would get it out to her patrol vehicles.

About five minutes later there was another knock at the door.  This time there was a patrol car in the driveway.  The officer asked me for a description of the men, their vehicle, and what they said.  Another patrol car pulled in, and the first officer repeated everything I said to the second officer.  That officer left to go look for the vehicle.  The officer told me that I had done right by calling the police, and to always call if I feel something isn't right.  I wondered all night if these guys were found, and, frankly, didn't sleep very well.

This morning, the police officer came by to give me an update.  He said shortly after he left the car was seen, followed, and it was trying to evade the police.  They were able to get it hemmed in and approached the vehicle with guns drawn.  The two men in the car were high on meth, and had a shotgun on the seat between them with a round in the chamber.  They were arrested for a lot of things and are now in jail.  One is out on parole and will be returning to prison to serve the remainder of his sentence.  The other one also had a record.

He again emphasized that I should always call the police if I see something unusual or if I am uncomfortable with anyone who comes on my property.  He gave me some good safety tips, one of which was to get a recording of a ferocious sounding dog that will bark and growl when the doorbell rings.  (He said this after he caught a glimpse of Penny who was hiding behind the door!)  And I am never never never to open the door unless it's a relative or someone I love.  I thought that was funny.  Certainly eliminates the pizza delivery guy!

Anyway, this could have been a bad situation had these guys pushed their way into my home, or if they had pulled that gun on the police officers when they were stopped.  It's too scary to even think about that.

A huge thank you to the police force for their quick response and especially for following up with me.  The good guys won!

I love finding signs that make me chuckle.  One below did - the other not so much.

A while back, Thelma mentioned never finding her name printed on things.  At that time she was looking at the Coke cans that had names on them.  I remember thinking that it's the same way with me.  If I see my name on something it's usually misspelled.

Well, a couple of weeks ago I got caught at a red light (seriously, there are only four in my little town) and I looked up and saw this. 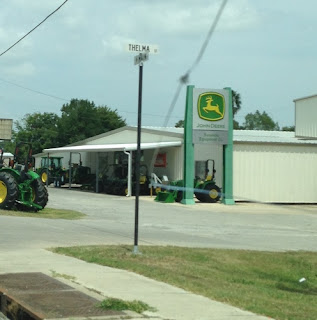 I laughed out loud and grabbed my phone to get a picture!

Thelma, just so you know, John Deere is an important business in this farming community, not only for the farmers but for all of us who have an acre or more to mow, which is probably most of the population.  I suspect at least once a year everyone turns on your street to get to the green and yellow place!  It's the most important street in the town, and befitting that it was named for you! 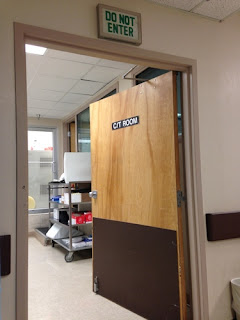 I told the CT doctor that I couldn't go in there.  He laughed.  He said they need to change that "Do Not Enter" sign as everyone says the same thing!

On this day I would rather have been on Thelma Street!
Posted by Vicky at 5:24 AM 5 comments: