New table is in!

This old dog is one tired puppy!

The acrylic insert isn't in yet, probably next week, so I just put the extension on that came with the machine and lowered the machine until it was nearly flush with the table.  It will definitely work for now. 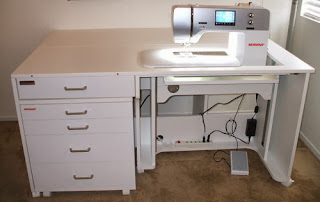 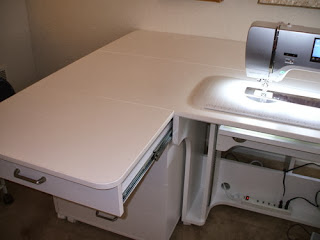 The table is really nice.  It's much like the other Horn table, but there are some nice features added.

It has an electric lift for the machine.  Nice.

It has a storage place underneath for the extension in the bottom photo.  Nice.

It came with a built-in electrical strip.  Nice.

The table has the Bernina logo on it even though it came from Horn.  I asked.  Apparently Bernina and Horn joint ventured on designing a table that would bear the weight of the bigger Berninas.  Nice.

I wanted so badly to keep the other table, but with storage at a premium here, I decided it had to go.  There's a Mennonite Thrift Shop two or three blocks from the house that was delighted to get it.  I think it will sell quickly for them.  In fact, before we left, there were a gaggle of ladies around the table looking at it.  I've never been over there before.  It was crowded with shoppers.  I'll have to check them out later.  An antique mirror caught my eye, and I was told they do get antique furniture on a fairly regular basis.

I need to rest for a bit, and then start unpacking everything that I boxed up.  I'm going to cull and toss a lot of stuff.  A woman on a mission!

Judging from the number of exclamation points in this post, I'd say I'm a happy camper right about now!!!
Posted by Vicky at 1:52 PM 20 comments:

Bad news, I have to hire someone to pick it up and deliver it to the house, and help me move the old one out.  And put where?  I kind of wanted to keep it for when I get in the new studio.  I had visions of having two sewing stations so a friend could come over and sew.  In the meantime, though, I'll have to deal with another table.  The way I'm feeling now, I might just call Goodwill to come and get it.  What a mess!

Honestly, I wish I had never gotten that new Bernina.  It's caused more hassle than is good for me.

I should have just gone back to bed this morning, or sewed, instead of trying to box stuff up in and on my sewing table.  Now I can't walk in there.

So I stopped that project and decided to make gumbo.  I'm not even good for that any more because I just overflowed the pot on the stove.  What a mess to clean up!

And Penny has been dragging leaves off of the patio into the house all day.  The maids were here yesterday, and I already need to vacuum again.  Pushing around a vacuum is not on the neurosurgeon's list of things I can do just yet.

Do you feel sorry for me yet?

I finished the bindings on both of the Celebration for Girls quilts yesterday afternoon.  They'll be delivered tomorrow after work.  Check! 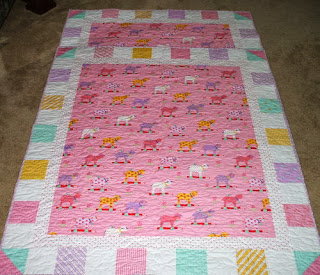 Then for some reason last night I was wide awake at midnight.  My back, amazingly enough, wasn't hurting, probably from all the ibuprofen I took during the day for my headache.  Anyway, I headed downstairs to the sewing room.

Nothing like a little Green Eggs and Ham at that time of the morning.  I finished framing the blocks and sewed together the guts of the quilt.  I need to add two borders and it's done.  I want to get this finished up this week so it can go off to the quilter.  I am SO done with Dr. Seuss fabric!! 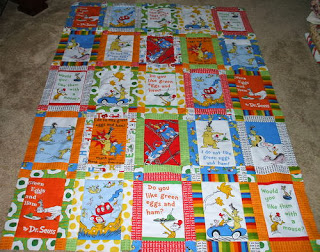 I probably should get the borders on today, but I need a break from those colors!  I have a fall/Halloween colored quilt that's tugging at my heartstrings right now, so I'll do some cutting on that and see if I can't get in a little sewing on it, too.

I need new movies.  I had the portable DVD player on my sewing table going last night, but I've seen everything I have at least twice.  Might have to stop over at Target tomorrow night to check out their selection.

I'm wanting gumbo so badly today.  I talked to my brother this week and that's what they were having.  Too bad I don't have all the fixings here.  Sheesh, I'm going to lose my Southern girl certificate for not having those ingredients on hand at all times!

I'm homesick.  Can you tell?

Ever since the server came back on last night, strange things have been happening.  Some files are missing, desktop images are gone ..... I don't know.  I was able to log on to Blogger this morning after quite a bit of fussing with it.  I'll call my computer guys today and see if someone can come out Saturday.  The cable box on the TV in the living room is out, too.  At least the one in my bedroom is still on.  I hardly ever turn TVs on, but I want them to work when I do.  Everything in this house is going to pot - including me!

Anyway, here are the two stupid pictures I wanted to post last night.  Nothing amazing but progress is being made in the sewing room.

Hand stitching the bindings, then these are done! 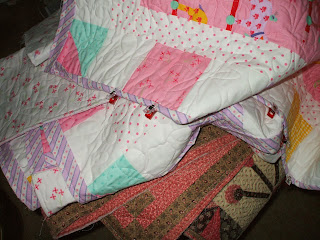 And the Apple Jelly Jam from the Jelly Jam pattern at Fat Quarter Shop.  Those of you who have made it, don't look too closely!  I managed to flip a couple of the pieces but it's still cute and bright and cheerful. After making this 36 x 36 quilt, I've decided that all the baby quilts I make from now on are going to be this size.  Whenever I talk to an expectant mother about quilts, they always give me color combinations of their nursery that, frankly, puzzle me.  I've fretted more times over finding fabric that might match their scheme.  From now on I'm going to make what I'm going to term "travel quilts."  These can be used in the car or stroller, and it doesn't matter what color they are.  And I think this is the perfect size for that use.

If you click on these pictures and they're gigantic, sorry.  Picasa won't let me sign in this morning, either, to size them.  So to paraphrase that much over-used phrase, they are what they are.

I have to go visit my friends at the hospital this morning for blood work.  It's bad when I walk in this gigantic facility and everyone knows me.  Means I've been there way too often!  Hey, maybe I can get my own reserved parking space!  :)
Posted by Vicky at 6:14 AM 3 comments:

I don't know what's wrong with me and Blogger.  It won't let me sign in from my desktop computer and that's where all my pictures are that I want to post.

When I try to sign in, it redirects (to where I don't know) and just sits there spinning.

I'm done.  I'm sick of fighting this every time I want to download pictures.

I'll be back if I can ever get anyone out here to fix whatever is wrong.

Why does that always happen to me on weekends?  I guess I can blame it on the Santa Ana winds.  Sounds good, huh?

I picked up the two Celebration for Girls quilts from the quilter, the bindings sewn on, and will hand stitch them down this week.  Also the binding sewn on Raspberry Truffle, the pink and brown quilt.

AND I did the Jelly Jam quilt out of the Apple Jack fabric.  Such a quick and easy pattern.  Of course, I managed to flip around a couple of blocks but it still came out cute.  I could have done the whole thing in under two hours if my 440 had cooperated.  I need to take it in to be serviced since I'm resigned to using it instead of the new Bernina.

So a productive weekend.  You'll just have to take my word for it!  Picture will be posted when I'm up and running again!
Posted by Vicky at 9:50 AM 4 comments: